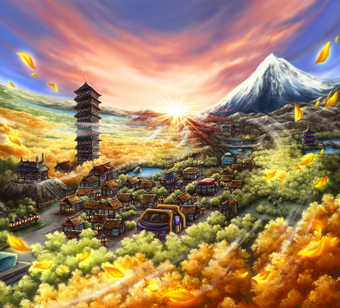 Mt. Silver is the tallest mountain of Johto and Kanto and the final destination in both Gen 2 and Gen 4.5.

It is the location of the final battle of Gen 2, where LazorGator and the rest of AJ's team bested AA-j, Bird Jesus, and the other Hall-of-Famers from Gen 1.

The mountain appeared once again in Gen 4.5 HeartGold, this time with Alice residing on it (named Red here), with her team of Shellock Holmes, DJ Stalinking, and the other Hall-of-Famers from Gen 3.5.

After several attempts Aoooo was able to defeat Alice, with the help of her team and especially her two level 100 Pokemon, Lard Helix and The Oracle.

The mountain was featured in a special battle between Dream Red and Abe, with Red having his Hall of Fame team at level 100. This was likely only a dream though, as it was accessed by checking the bed, Red was called Dream Red, and commands such as start9 were used in the speech and graphics of the location.

Baba traveled to Baizhong Mountain to face Sorcerer Sho, who was based on Red, the main protagonist from the original games who used an unedited team consisting of Pikachu, Charizard, Blastoise, Venusaur, Snorlax and Espeon. She defeated him using just BEST on her first try.

Evan journeyed here after defeating the more powerful Gym leaders, Elite Four, Professor Oak and completing the Pokédex. He ran into Red at the entrance of the mountain and Abe in the mountain, easily defeating them and opening up a path leading further down, which led to a set of ruins where the true final boss, Professor Elm, was waiting.

Community content is available under CC-BY-SA unless otherwise noted.
Advertisement